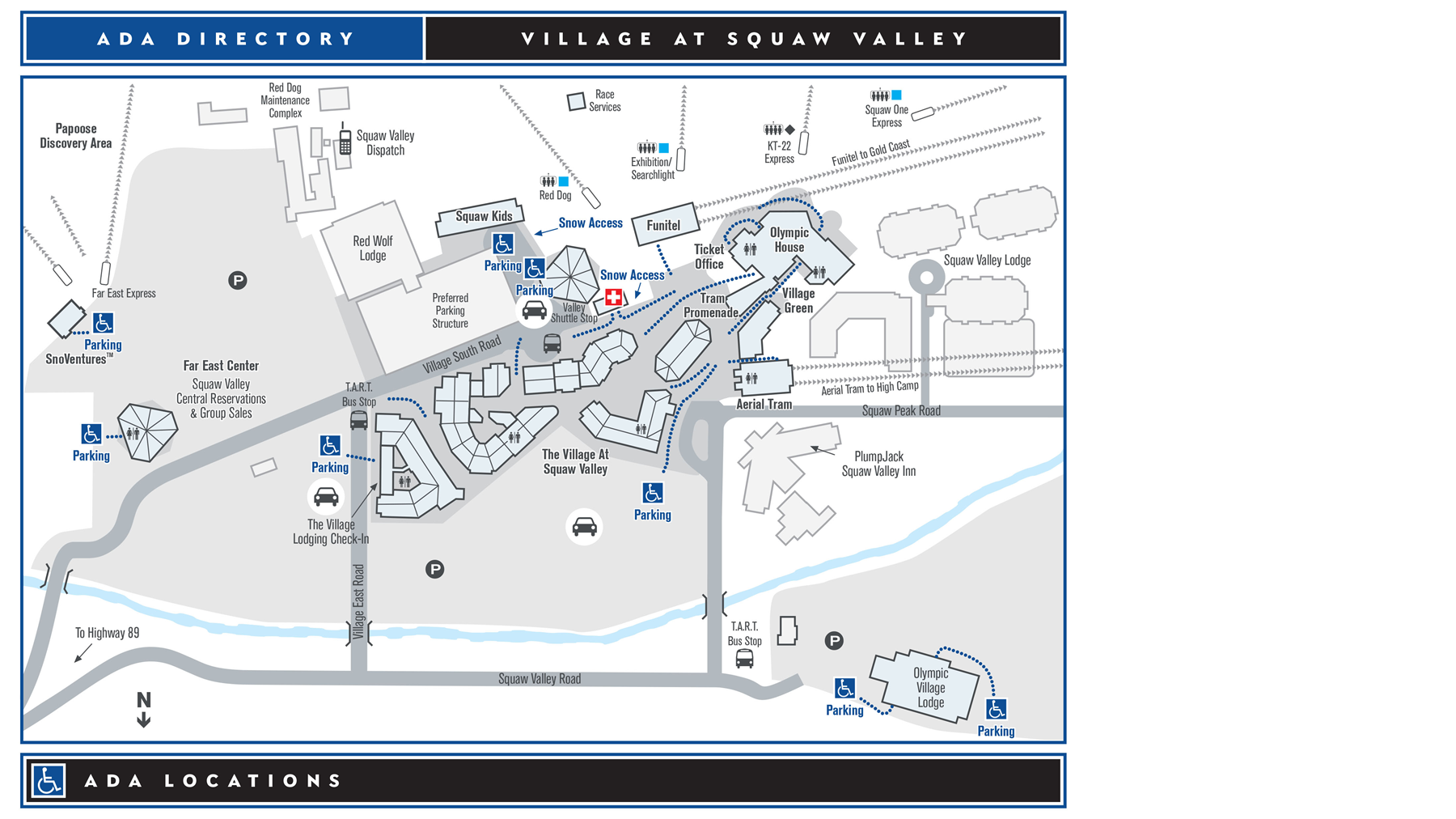 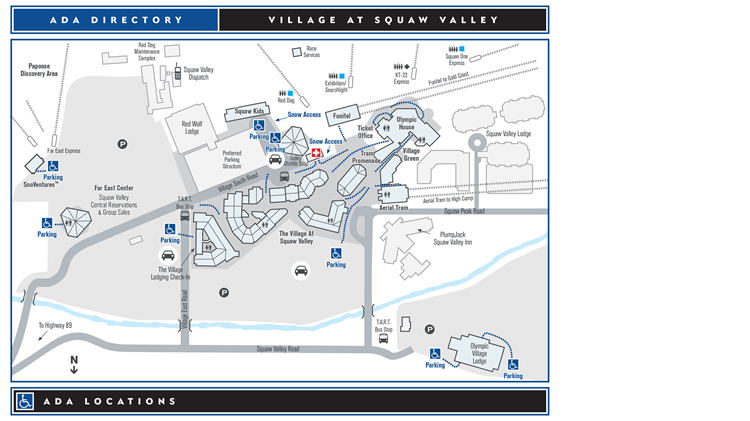 
Notify us in advance of special accommodations:
Please call 1-800-403-0206 or 1-800-735-2929 (TTY) rich-text
Parking
rich-text
There are several accessible ADA Parking areas for resort guests with Handicap Parking permits for access to our facilities.

rich-text
RESTROOMS
rich-text
There are several wheelchair accessible restrooms in the base area.

rich-text
VILLAGE AND BASE AREA ENTRANCES rich-text
There are three zero entry guest entrances to the Olympic Valley base area. Guest pathways in the base area are comprised of block pavers, asphalt and concrete. All access points are very close to the heart of the base area.

Palisades Tahoe allows the use of adaptive devices or other “manually-powered mobility aids” designed for use on the ski slopes. Adaptive devices are any specialized equipment that have been designed and manufactured solely for use by individuals who have disabilities, including ski bikes, mono skis, bi skis, outriggers and sit-skis. For those that have disabilities and wish to use adaptive devices on the slopes, our essential eligibility requirements for various activities are available in all of our ticket offices. If you have further questions, please contact us at the number(s) above prior to your visit. The use of ski bikes or adaptive devices by those without adaptive needs is prohibited.

Instruction - Achieve Tahoe provides instruction and can arrange use of such devices when requested in advance to ensure qualified instructors are available.

Ticket Windows
Wheelchair Accessible Ticket Window and the Season Pass Office is located across from the Funitel and inside the Tram Building.
All guests interested in accessing the mountain are required to have a lift ticket or season pass.

O House facilities Wildflour Level, KT Kitchen/Bar One Level and Pocket Bar Level are accessible from the walkways. Plaza bar is accessible via the elevator adjacent to the loading dock. A Resort Host can help direct guest to the elevator

High Camp/Tram
Tram lobby is accessible via a ramp on the South side.
High Camp facilities are accessible via several small elevators including access to all F&B outlets. Accessible restrooms are available.

Funitel is accessible entrance is located on the North side of the building off of the pavers. The elevator to access the Funitel loading level is located immediately to the left as you enter the building. A Resort Host can assist you in loading the Funitel.
Gold Coast Complex is accessible at all three levels via an elevator located next to the entrance to Starbucks.


OVL - Corporate Office/Grand Ballroom
The main conference space (Grand Room) located on the second level is accessible via a ramp on the North West corner of the building.

Palisades Tahoe has determined that the use of any power-driven devices or vehicles by the public on the mountain (including other power-driven mobility devices used by individuals with mobility disabilities), creates an unsafe environment for both the user and the public based on the experiences of other ski resorts and Palisades Tahoe’s experience with motorized equipment on the ski slopes generally and with particular attention to various types of power-driven personal mobility devices. Injuries resulting from the use of such devices on the slopes can be more serious than other types of risks and expose the user and other skiers/snowboarders to a greater risk than non-power driven adaptive devices, particularly in the case of collisions with other skiers and snowboarders. These safety concerns are compounded by our facility’s volume of skiers and snowboarders. These safety requirements are based on actual risks and are not intended to be discriminatory in any way; such devices cannot be used by non-disabled persons as well. Use of most power-driven mobility devices are authorized in the base village area.

The use of any power-driven devices or vehicles by the public on the mountain (including power-driven mobility devices designed solely for use by individuals with disabilities) in summer is not allowed at any time. Palisades Tahoe has determined that the use of such devices creates a substantial risk of not only serious harm to other users of the resort, but also to the immediate environment and natural resources. Due to the need to address soil integrity, erosion and vegetative concerns, Palisades has adopted a “no motorized” policy for the public during the summer season. Use of power-driven mobility devices are authorized in the base village area in the summer.

Under the ADA, service animals are dogs (and in certain cases miniature horses) that are individually trained to perform tasks for people with disabilities, including but not limited to: guiding people who are visually impaired, alerting people who are hearing impaired, pulling wheelchairs, opening doors, alerting and protecting a person who is having a seizure, or performing other special tasks. Service animals are working animals, not pets and no other types of animals, including what are commonly referred to as emotional support, comfort or crime deterrent animals qualify as service animals under the ADA.

The allowance of service animals at the resort is subject to two exceptions: (1) the animal is out of control and the animal’s handler does not take effective action to control it; or (2) the animal is not housebroken. A service animal shall have a harness, leash, or other tether, unless either the handler is unable because of a disability to use a harness, leash, or other tether, or the use of a harness, leash, or other tether would interfere with the service animal’s safe, effective performance of work of tasks, in which case the service animal must be otherwise under the handler’s control (e.g. voice control, signals, or other effective means).
accordion, accordion-placeholder
Palisades Tahoe SERVICE SUGGESTIONSWe strive to provide a great experience for guests with disabilities and welcome an opportunity to improve in this area. If you believe we were not in full compliance in connection with our obligations in this area in anyway at all, please let us know by email to info@palisadestahoe.com or Palisades Tahoe POB 2007 Olympic Valley, Ca 96146, Attn: Michael Gross. Alternative means of communication, such as personal interviews or a tape recording will be made available upon request.


WEBSITE
Palisades Tahoe is committed to delivering a web experience that provides equal access and opportunity for individuals with disabilities. Website accessibility information is found by following the link at the bottom of every webpage titled “Accessibility.” If you have trouble accessing any part, of our website please send an email to accessibility@alterramtnco.com or contact info@palisadestahoe.com.


ACHIEVE TAHOE
We are a proud partner and host of Achieve Tahoe. More information about programs offered by Achieve Tahoe can be found on our website or their site or by calling 530.581.4161. rich-text
ADA Village Map & Directory
{"centeredHeader":false,"twoCharacterWeekDay":false} button-links 2271.2077 True